Lion Whisperer:A South African lion whisperer who has been accepted as part of a pride and pictured cuddling his big cats has condemned tourists petting cubs.

Lion Whisperer:Kevin Richardson lounging with lions as though they were house pets might resemble a circus act in the African bush, but he is using the attention to condemn the South African industry in which customers kill captive-bred lions in confined areas.

He and other critics describe the practice as ‘canned hunting’ and also condemn the tourist draw of lion cub petting in special enclosures, saying those same animals would not be able to survive in the wild and often get cycled into the ‘trophy’ industry to be shot for a price.

‘The tourists have been hoodwinked into believing that their contribution of funds is going into lion conservation.’

The number of lions in the wild in Africa has dropped by more than 40 per cent to about 20,000 in the past two decades, according to some estimates.

One South African operation, the Lion and Safari Park, said it stopped lion cub petting but had to resume it because of a ‘dramatic and unexpected’ drop in visitors and tour operators who sought out cub petting elsewhere. It said it keeps its lions until they die of natural causes or donates them to ‘reputable’ zoos and parks, and does not sell its lions to hunters.

Today, 42-year-old Richardson, who is married and has two children, manages a wildlife area with 31 lions within the Dinokeng reserve north of South Africa’s capital, Pretoria. Many of the lions, which were captive-bred and cannot be released into the wild, were rescued from being transferred to operations that would let customers shoot them, he said.

Lion Whisperer:Richardson said he does not breed lions and that those on his 1,300-hectare (3,200-acre) property feed on donated carcasses of cattle and antelope.

‘I have been accepted as part of the pride,’ said Richardson, scratching the lion Bayetsi’s chin. ‘But I have to be very careful. They are large animals and are very good at telling you how they feel.’

The lions have scratched and bitten Richardson over the years, but he said more hurtful to him has been the criticism he has faced after being filmed wrestling with his lions or roaring with them.

Richardson’s website, which offers merchandise including T-shirts, key chains and calendars, says he seeks to promote wildlife preservation through ‘education, awareness and funding’.

Luke Hunter, president of Panthera, a conservation group, commended Richardson for his passion and ‘authentic’ concern for lions, saying: ‘His messaging, for what he has and what he can do, is good.’ 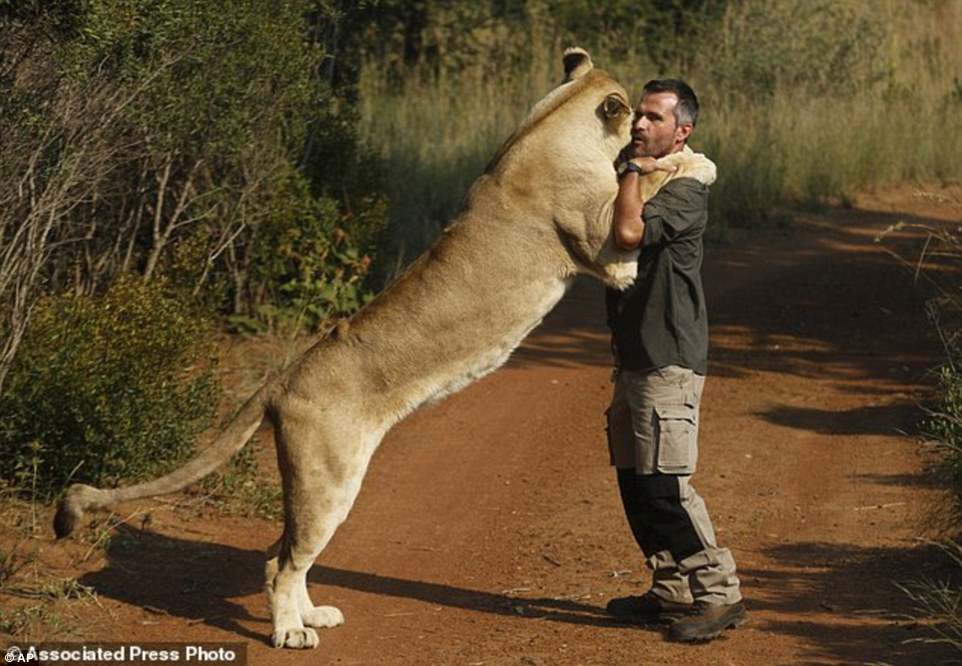 Lion Whisperer:Richardson is trying to curb the tradition of people petting cubs, and said: ‘Today’s lion cub becomes tomorrow’s trophy and the unsuspecting tourists have blood on their hands’

The spectacle of Kevin Richardson lounging with lions as though they were house pets might resemble a circus act in the African bush, but he is using the attention to condemn the South African industry in which customers kill captive-bred lions in relatively confined areas 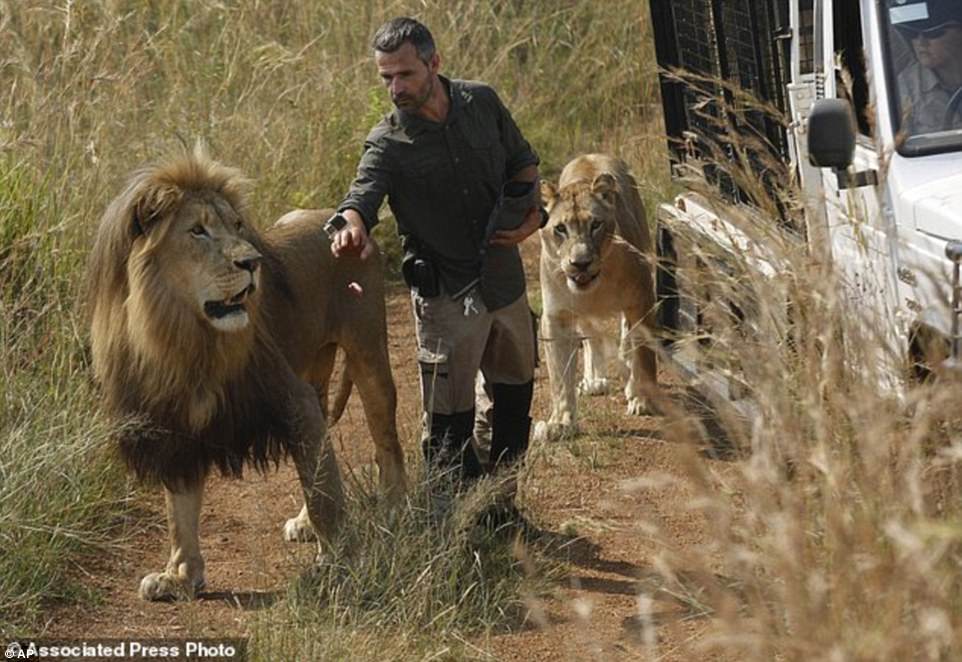 Lion Whisperer:Richardson takes two of his lions for a walk in the Dinokeng Game Reserve, near Pretoria, South Africa

Lion Whisperer:But Hunter emphasized the broader conservation needs of the lion, including efforts to protect habitats and address poaching, in which antelopes and other potential prey for lions end up in the bushmeat trade, and lions get trapped in snares laid down indiscriminately.

Lion Whisperer:A relatively recent concern is demand in some Asian countries for lion bones used in traditional medicine, and the possibility that poachers are increasingly targeting lions to meet that demand.

Currently, South Africa allows the legal, annual export of bones from hundreds of captive-bred lions to China and Southeast Asia.

Richardson spoke of his intimacy with the animals.

‘The relationships I have with them are purely to give them a better quality of life in a captive situation,’ he said.

‘I will look after them as long as I can.’