pedestrians – injuring:Terrifying footage has emerged of holiday makers screaming as a British driver ploughed through pedestrians injuring a seven-week-old baby and at least five others.

The clip captured dramatic moment a 4×4 allegedly driven by a drunk driver mows down and injures three pedestrians in the holiday resort of Puerto Banus.

The distressing footage shows the Audi SQ7 appearing to be driven deliberately at victims before fleeing as the first police and paramedics near the scene.

Horrified Brits caught up in the carnage can be heard screaming in panic as the vehicle screeches round a pedestrian area near the resort’s famous Ocean Club.

One woman overlooking the scene shouts out in English: “Get Away, Get the F##k away” after the car appears to smash into another vehicle on a roundabout before mounting the pavement for a second time and being driven recklessly at speed.

Another Brit can be heard yelling: ‘Get him’ and ‘Get away’ as the vehicle comes back into shot on a video filmed using a mobile phone and pulls to a stop alongside a bare-chested man in shorts who appears to be injured and is on his knees in a flower bed.

A man in a blue T-shirt – who looks to have been a passenger in the Audi – seems to get out of the vehicle and slams the door shut before disappearing.

The car then speeds away as the first sirens near – leading police on a spectacular chase which ended when it smashed into several vehicles on the wrong side of the road nearby Marbella’s famous Golden Mile.

The Brit driver, believed to be 22, was arrested at the scene.

The driver has been arrested after mowing down pedestrians in the Costa del Sol holiday resort of Puerto Banus before smashing into several cars during a police chase.

The unnamed 22-year-old is believed to have been asked to leave the nearby Ocean Club – which was hosting its annual champagne party – after a fight.

Police are now investigating whether he deliberately mounted the pavement and drove down a pedestrian area leading to the club, mowing down people in his path – including a seven-week-old baby.

Initial fears the incident on the Golden Mile was terrorism-related were ruled out by police, who said the driver was drunk

Pedestrians hit by car after it mounted pavement in Marbella

Initial fears the incident on the stretch of road known as the Golden Mile was terror-related were ruled out by police who said the driver had been drunk.

The incident happened around 9pm on Sunday as revellers were leaving the popular venue after its annual champagne party, which attracts celebrities and international footballers.

One eyewitness said they thought it was ‘a terrorist attack at first’, while another British witness told The Sun: ‘I was lying in the middle of the ground. I thought I was going to die.

‘I saw two people get hit and heard at least another six hit. It came out of nowhere.’

Six people were taken to the nearby Costa del Sol Hospital. One was being operated for a broken leg, another is believed to have suffered a possible fractured pelvis and a third arrived unconscious and is undergoing tests.

pedestrians – injuring:All are thought to be pedestrians who were mown down near the Ocean Club. Their nationalities have not yet been revealed.

The other three people, who are not described as seriously injured, are a 38-year-old man, a 35-year-old and a baby.

They are believed to have been travelling in one of the cars hit by the Audi Q7 after the British driver fled the original accident scene.

The driver then crashed into several cars by Marbella’s Coral Beach area on the Golden Mile moments after leaving the scene at high-speed. 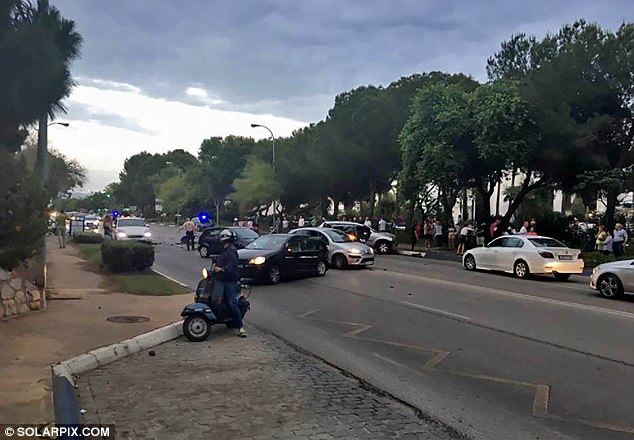 pedestrians – injuring:Several pedestrians were injured after being hit by the car which mounted the pavement near Puerto Banus’s Ocean Club 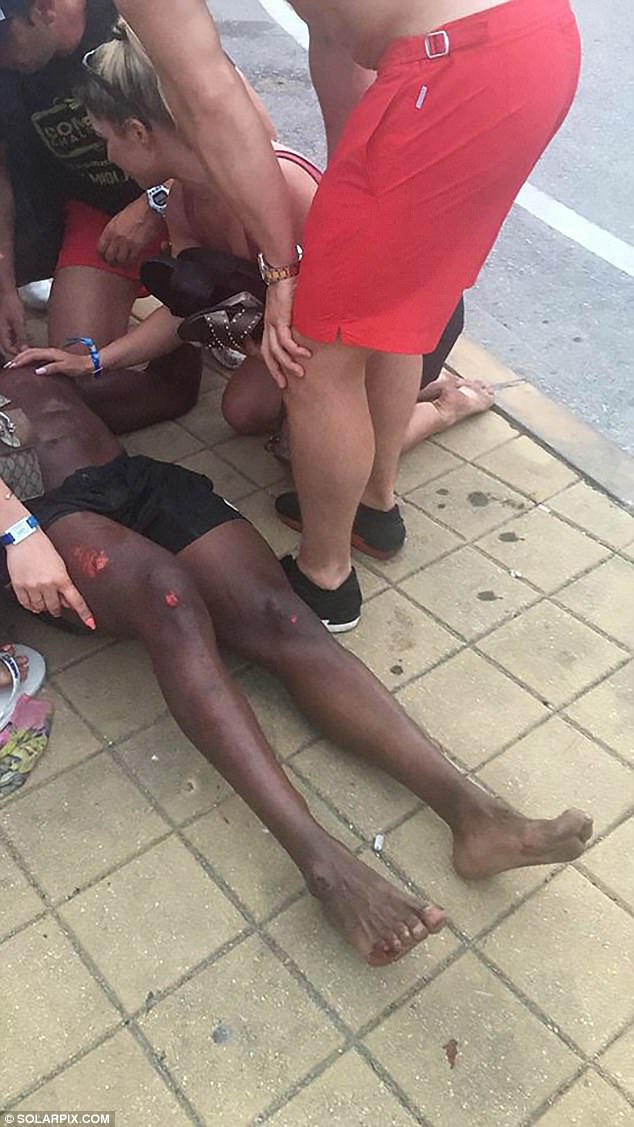 Traffic police closed the road so they could help paramedics attend to the injured and remove the damaged vehicles.

A police source allayed fears of terrorism, saying: ‘A man of British origin believed to have been driving under the influence of alcohol has been arrested.

‘There is no evidence this was in any way terrorism-related.

pedestrians – injuring:’Pedestrians were injured at the scene of the original incident. There were casualties at the car crash scene as well, including a young baby, but none are believed to be serious.’

Local social media sites carried pictures of an injured man in shorts lying on the ground, with one social media user commenting: ‘A car has just sped along the seafront by the Ocean Club in Puerto Banus and has run over a lot of people.

‘The car has fled the scene.’

A spokesman for the Ocean Club, where most revellers are British, said they were not aware of the incident and it hadn’t happened inside the club. 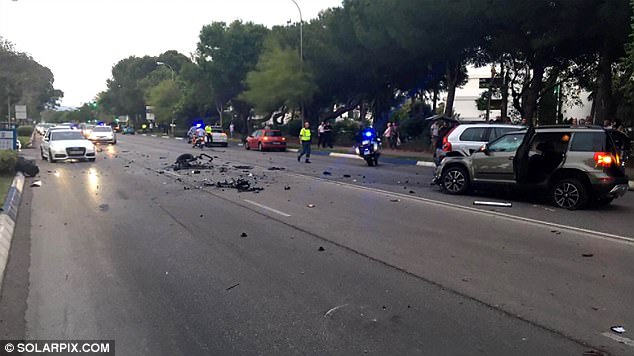 pedestrians – injuring:Police have closed off part of nearby Marbella’s Golden Mile where the hit-and-run driver crashed near a five-star hotel

A nearby worker said: ‘I’ve heard the man they’ve arrested got into a row over a girl and may have driven deliberately at the pedestrians that were injured.’

pedestrians – injuring:The black Audi the detainee was driving was a write-off.

It was not clear last night if Spanish police were still hunting anyone else in connection with the incident, although it was initially believed several men had been spotted running from the Audi after it crashed.